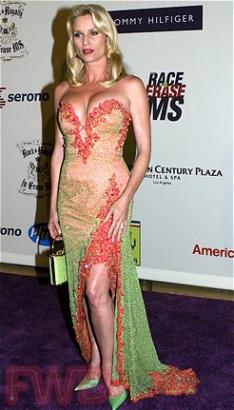 Manolo says, the Nicolette she is like the hard plastic Christmas ornament from the Playboy collection.

She just never photographs well. She needs more makeup. And different gowns. She needs to take a note from Morgan Fairchild.

I mean – I do, too, frankly. Not the Morgan Fairchild part.

Is she made of marzipan?

What would the Marzipan think of that? Would the she-broom be flattered or ignore the comment?

It’s amazing how much work these drag queen put into dressing like women. that much have taken Nicholas Sheridan hours to squeeze into that dress!

Where did she find a papaya big enough to make into a dress?

The Scarlett 18 years ago

Green shoes, red legs. No, not a good look for northern european sisters in our 40’s.

uhh..jennHi, I don’t think La Cabrita meant Homestar’s girlfriend. I get a feeling she was talking about the confection.

That said, Nicolette Sheridan really looks plastic in all of her pictures. She’s like a poorly-dressed Barbie.

The irony of the marzipan comment it was lost in the color of the link the JennHi had generously created for your amusement on the name Marzipan. Yes, the JennHi is aware of the delicious almond confection, but the humor it was good before the pressing of the “submit comment” button.

Still, what would the Marzipan say? The Nicollette Sheridan she defies all rational comments from the JennHi.

Indeed there was a selection of little green frogs wearing red jackets at the fancy market of Gelson’s at Christmas. And they were made of marzipan. The color palette is so remarkably similar.

The frogs were much cuter, though.

Ha! La BellaDonna, she wishes to point out that Sky News, which spoke so disparagingly of the affection displayed by the Mr. and the Mrs. Hasselhoff, described this as:

“But they were outshone by Desperate Housewives actress Nicolette Sheridan, who looked stunning in figure hugging red and green outfit.”

La BellaDonna believes that the taste, discernment, and credibility of the Sky News, it speaks for itself.

(La BellaDonna will also generously donate the limiting adjective “a” to Sky News, as the quote, it was lifted directly, and would benefit from said adjective being inserted between “in” and “figure hugging.” Sky News could also use a hyphen for the phrase, “figure hugging,” but La BellaDonna, she is not feeling that generous. Sky News can just take the adjective and insert it.)

At least she’s still alive. And not disgustingly emaciated.

looks like someone threw up an avocado and strawberry salad.

Is it just me or does she look just like the Jessica Rabbit?