Manolo says, behold, the final stage of evolution for the low rise jeans.

P.S. For the male version look at this from the Manolo for the Men.

Manolo says, this explanation from the Faux Manolo, it is more than satisfying to the Manolo. In the fact, this part it made the Manolo laugh.

It is indeed true, the real Manolo he cannot be everyone at once, and so it is understandable that there would be those, like the department store Santas, who will perhaps adopt the persona the Manolo to spread the joys of fashion to the further reaches of the internets.

King of the Jungle! 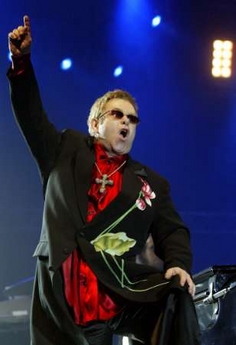 Manolo shouts, I am Elton! Hear me Roar!

Manolo says, this beautiful, simple, rich-looking wedge, it is on the sale at the Gotham City Online, the sad part is that it is only available in the limited sizes.

Manolo says, ayyyyyyy! There is the fake Manolo pretending to be the real Manolo at the website of the KABC providing the advice of the fashion without the license.

Yes, it is flattering that someone would chose to imitate the Manolo, but at the same of the time, it is somewhat disconcerting.

All the Manolo–the real Manolo–he can say is “accept not the substitute”.

Miuccia Speaks of the Clothes 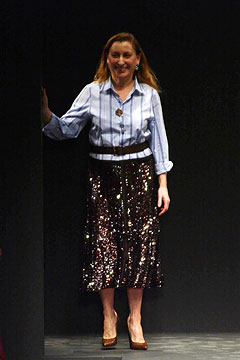 Manolo says, the Miuccia she has unveiled her spring/summer men’s collection for the 2006, and the beautiful Samurai Suzy she has passed the judgement…it is the triumph!

In her fresh, clean-cut show and in her wise words, Miuccia Prada put into perspective the malaise pervading high fashion menswear, which other Italian designers have tried to face off with vivid color and graphic pattern for summer 2006.

“Fashion should become more egalitarian. I am not interested in dealing with a few sophisticated people,” Prada said. “Crisscrossing everything is the main issue: the need to face the huge world and to appeal to new countries and new customers.”

So for Prada, Monday’s show was a stark return to basics: to the skinny silhouette, to fabrics treated with techno shine, to nylon work-wear, to hosiery-fine sweaters and to symbols to identify the label. And being Prada, with her penchant for a communist/populist aesthetic, that meant stars (but not necessarily red) printed on shirts, neckties or decorating the new must-have nylon backpack – along with hearts to put soul into a sober collection.

The result was a show of those perfectly judged and wearable clothes on which Prada built its empire. But the reprise did not include her much-copied brief coat, short boxy suits or sour colors. In fact, Prince of Wales tailoring was classic, and there was a wry sweetness to an aqua blue suit, to a dusty pink shirt or a moss green sweater. Pants with softening pleats offered a new cut.

Why is Prada so often ahead of the pack? Because she has an ability to invent new menswear classics as if they had always existed. After a few seasons of kooky effects, any piece of this show – and that includes the head-wrap hats – could have walked right out on silvered sneakers or smart leather shoes onto the Milan streets. It was fashion for the real world and for its future.

For the Manolo there is much that must be discussed from this show and from this article. First, we must address the wise words of the Miuccia herself.

“Fashion should become more egalitarian. I am not interested in dealing with a few sophisticated people,” Prada said. “Crisscrossing everything is the main issue: the need to face the huge world and to appeal to new countries and new customers.”

Manolo says, the regular readers of the Manolo know that this, this egalitarian approach to the fashion, it is the bedrock philosophy of the Manolo. Being super fantastic, it is something we should all strive to achieve, and the beautiful clothes and the beautiful shoes they should be for everyone who wishes to do so.

Yes, not every piece of every collection is able to be worn by every person, but the designers who are important they are making clothes that are wearable by the real peoples, not the clothes that are simply the ridiculous runway statements.

The democratization of fashion and beauty, it is one of the trends that is, in the humble opinion of the Manolo, changing the world. As more people they become better educated, they are demanding the beauty and the good design in their own lives. (This it is the special topic of the Manolo’s internet friend the Virginia Postrel.)

What the Miuccia and the Suzy Menkes recognize is that the best fashion it will appeal not just to the cognscenti, but to the wider world. This, what we are speaking of, it is not the mass clothing of the Wal-Mart (although to some of the extent it eventually trickles down to the Wal-Mart) but it is instead the idea that the new tools of the medias, they have enabled ordinary peoples living in the ordinary places to become carefully attuned to fashion and beauty, to the point where they wish to have these things in their own lives. And the search for the suitable, flattering, and appealing individual style, it has become the true quest, the true desire of millions.

This, it is why the Suzy Menkes she ends her discussion of the show of the Prada with the words, “It was fashion for the real world and for its future.” The future, which has already arrived, it is the democratization of fashion, and the desires, which will be satisfied, of individuals everywhere to wear beautiful clothes.

P.S. The Manolo he has the few picture from the show and comments about them over at his Prada blog.

Manolo says, it is the Tuesday, and here is what the Manolo is..

It is no secret that the Manolo he is something of the gourmand, one who loves to both eat and read.

After a very very down day, I decided to do something nice for myself and soon thereafter had my first ever pedicure. My feet looked so great, I decided to go get some new summery shoes to celebrate. I found some beautiful sandals, very similar to the ones featured in your “Not So Cheap For The Beach” post. Much to my surprise, they FIT wonderfully (I have large feet, and oddly shaped), and best of all, as you would say, they were on the sale!

I was thrilled to look down at my feet and see something superfantastic there, so I made up my mind then and there, bought the shoes, and enjoyed my new happy mood all the way home. Manolo, I was so excited to see pretty shoes on my feet that I forgot to walk around in them a bit before I bought them.

With every step, thwop! thwop! thwop! the back of the shoe slaps the sole of my feet. They fit wonderfuly and are perfect in every other way, but this thwopping! Oy! It makes me feel so self-conscious that I drag my feet a little, and because the sole of the shoes has a bit of ridging, if I’m not walking on a perfectly smooth surface it tends to sound like… ah… gastrointestinal distress. NOT NOT NOT superfantastic.

I see other women wearing these kinds of shoes all the time, and I know that the thwopping is not really as loud as it seems to my ears, but… is there some kind of a trick, some anti-thwop device, a special walk I can practice? Do I strap Velcro to my feet or put a dollop of superglue on every time I wear them? Or do I just grit my teeth and force myself to ignore it? It’s hard to have a superfantastic stride when you’re trying to keep your shoes quiet.

Ayyyyy! The flipping and the flopping it is indeed most annoying, not only to the flipper and the flopper but also to those innocents who may be within the range of this noise.

However, have not the fear. The Manolo, although he himself is not the wearer of the slides or the mules, knows the answer to your question.

The secret to the walking gracefully in the pair of the slides or the mules it is as close as your nearest old-fashioned lesson of correct Victorian deportment. The secret it is to practice walking in the shoes, but to do so as the stuffy old ladies they trained the proper young ladies in the days of the past, with the book on the head.

Yes, this it sounds ridiculous, but the book on the head it forces the correct posture. And if you wish to learn to glide with a certain gracefulness, instead of clomp with a certain bovineness, this it will help train you to do so.

The Manolo, he will now ask his many internet friends for their suggestions. 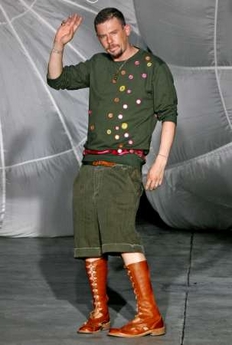 Manolo says, Umm, Excuse me Ms. Crabapple. MS. CRABAPPLE! I have to go number one!

The Shamelessness of the George Clooney 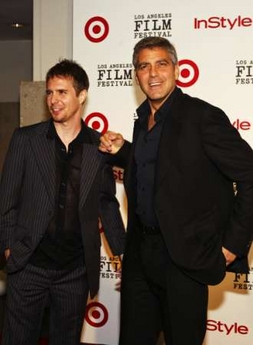 Manolo says, the heart of the Brad Pitt it is breaking!

Manolo says, you must visit the website of the Platform Diva.