Manolo says, it is always sad when someone dies, and doubly so when someone in the prime of life, full of talent and promise, kills himself. And so it was with great sadness that the Manolo read this morning of the suicide of Alexander McQueen.

He will be very much missed.

And now the Manolo must ask, why the prominence of the skull motif in his most recent collection?

And not just in shoes, but scarves, t-shirts, even the macabrely humorous rings. The skull motif was among the most popular things Alexander McQueen had ever done, and yet the Manolo wonders, why?

Why did Alexander McQueen produce his own memento mori?

In retrospect, it is now all so sad.

Update: Catie at the Cuffington Blog has something important to say about Alexander McQueen’s suicide.

Manolo says, Cher looks very good, as if she’s made of bees wax and bailing wire.

Sigerson Morrison on the Sale

For the example, these knotted high heel sandals from Sigerson Morrison are over 50% off of the regular price, the true bargain! 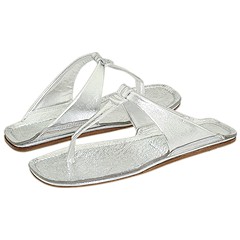 And these silvery thong Sigerson Morrison sandals are selling at the discount, over $170 of the American dollars off of the usual price!

And now you must hurry! Before these bargains are disappeared!

Manolo says, about the Who and that “CSI Medley”

Manolo answers, it is the Salma Hayek!

Congratulations to the Manolo’s internet friend ChimChim (the multiple time winner!) for being the first person to correctly identify this week’s bodacious personage of note.