Manolo says, there is only one proper response to shoes this fabulous…

Hand the Manolo down his walking cane…

“So much rhythm, grace and debonair from one man…”

Manolo says, here are the Manolo’s favorites from the Carpet of Red from the last evening.

This is the lovely, restrained, classic black gown, with the proper amount of glamour, and unlike many of her most recent outfits, does not display her magnficent Sofia-Lorenesque bosom overly much in the vulgar manner.

Few are the times the Manolo can recall bangs working for such the august occasion, but here they go marvelously with Emily Deschanel’s tiered purple gown. The look is fun without being silly.

Manolo says, among the trends the Manolo detected at the Awards of the Emmys last evening was the peoples who’ve decided to just say “the Hell with it.”

Krya Sedgwick reports that Louis Licari was was all booked up.

Well, at least the Beau Bridges dyed his eyebrows.

No pre-awards show purging for the Rita Wilson.

Manolo says, among the trends the Manolo detected at the Awards of the Emmys last evening was the older lady pantsuit! Cheyenne, a wealthy former rock star (Penn), now bored and jaded in his retirement embarks on a quest to find his father’s persecutor, an ex-Nazi war criminal now hiding out in the U.S. Learning his father is close to death, he travels to New York in the hope of being reconciled with him during his final hours, only to arrive too late.

Having been estranged for over 30 years, it is only now in death that he learns the true extent of his father’s humiliation in Auschwitz at the hands of former SS Officer Aloise Muller – an event he is determined to avenge. So begins a life-altering journey across the heartland of America to track down and confront his father’s nemesis.

As his quest unfolds, Cheyenne is reawakened by the people he encounters and his journey is transformed into one of reconciliation and self discovery.

CHEYENNE
(holding out black and white photo of smiling Nazi.)
Excuse me, have you seen this man?

CHEYENNE
(he squats in the dust near the porch, and rocks back on his heels. Tentatively he reaches out and pets the dog.)
Are you sure?
.
.

As his date with destiny arrives and he tracks down Muller, Cheyenne must finally decide if it is redemption he seeks ….or revenge.

ALOISE MULLER
(extending briefcase full of gems)
You are ze smart young man, I could share some of zese diamonds vit you, to forget about what you have learned.

ALOISE MULLER
(whips out knife and attacks, knocking the pistol from CHEYENNE’S hand.)
Zen you must die, filthy rockstar pig-dog!

( As the pair struggle the diamonds are spilled into the water below, where they glistening like so many priceless gems in Manhattan drinking water.)

ALOISE MULLER
No! Not my precious diamonds!!!!!

(He slashes out angrily, misses and falls on his own blade, and dies.)

Manolo the Columnist: My Charm by Salvatore Ferragamo

I’m starting a new position this fall as the director of a private Montessori elementary school. All day long, I’m on my feet dealing with parents and students, so I’d like to maintain a certain air of authority. Also, despite the standing image of Montessori education, we’re not a bunch of hippies, so I’d prefer something sophisticated. Please help.

Manolo says, the Manolo, who is the fundamentally irresponsible person, could imagine few jobs more taxing than being the director of the elementary school. Of the course, it is not the children whom the Manolo would find most taxing, for indeed, children have the capacity to be both charming and naughty in equal measures.

No, it is the parents who are the problems, with their incessant demands that you prepare their kindergartners for early admission into Harvard while supporting their untenable, sugar-based system of childhood behavioral modification.

“We find that Olivia responds well to Snickers bars. Perhaps you could have Ms. Sarah integrate them into Olivia’s daily work.”

And heaven forefend you must at some point offer mild rebuke to the little snowflakes of such families.

Look! Here is the My Charm from Salvatore Ferragamo, the modest, mid-heel pump that commands respect. The Manolo likes this grey color called “grigio cenare”, although it is also available in blue, and black, and the intriguing brownish-grey colored termed “vulcano”.

Manolo says, the weekend approaches and you are unprepared for romance! What better way to gird about your loins in super fantasticness than with something such as these ridiculously beautiful, ridiculously expensive, four-inch, lace-bedecked marvels from Alexander McQueen!

What is that you say?

“But Manolo, I live in the rural area and have no place to wear such beautiful shoes, worse, I only know the sort of men who appreciate mud bogging and buffalo wings, men whose idea of the fun night out includes too many pitchers of domestic beer and playing hick-hop music loudly on their truck stereos.”

To which the Manolo replies…

“Are you not woman? Can you not roar?” Manolo answers, it is the Conan O’Brien!

Congratulations to the Manolo’s internet friend Retna, who was the first person to correctly identify this week’s Coco of note. Alanis Leopard Ankle Boots from Jimmy Choo for the Monday

Manolo says, it is Monday and your long summer nightmare has finally ended; the children have gone back to school!

Celebrate with ridiculously leopardy boots from the Jimmy Choo! 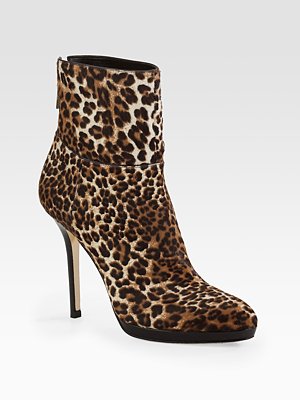 P.S. Yes, it is true, the Manolo has been all about the big cats for the past few weeks, but few of the previous examples he has cited have been as super fantastic as this.

Manolo says, her is the Manolo’s latest column for the Express of the Washington Post.

I’m twenty-six years old and I feel I’m stuck in a rut. I know that I’m lucky to have any sort of job in this current economy, even if it’s low paid and a bit of a dead end, but I can’t help but think that things should be better for me. Please recommend some fun, but reasonably priced shoes to help me get past my “quarter-life crisis”.

Manolo says, the Manolo sympathizes with his friend, for he too experienced the similar sort of thing when he had his “eighth-life crisis”.

When the Manolo was twelve years of the age, he found himself stuck as the Second Assistant Shoeshine Boy in the shoe shop of the Mercurio Albornoz y Bahamonde, seemingly unable to take one more step up the ladder of career achievement. It was most dispiriting.

Happily, the Manolo’s solution finally arrived when he decided to go back to school at night, to complete his 8th grade degree. The very next year, all of this hard work paid off, and the Manolo was promoted to the management: Associate Shoeshine Boy in Charge of Laces. This exalted position even included it’s own wooden crate, upon which the Manolo could squat while he labored!

Look! Here is the Amorita from Betsey Johnson, both fun and on the sale!