The Manolo in Chile

Manolo says, for those friends of the Manolo who still sometimes cry out in the night, “why are we no longer being shown the shoes of super fantasticness,” who occasionally in the odd moment wonder what is happening with their old internet friend the Manolo, well, here is update.

For the next few months, the Manolo has forsaken his usual haunts for the muy dramático landscapes and muy dinámico cityscapes of Santiago de Chile. And, sadly, he must again report that the Chilenos are no more stylish than the last time the Manolo was here. The Chilenos, they are increasing everyday in the prosperity and stability, but they have disastrously adopted the worst elements of the American People of the Wal-Mart fashions, with the grotesque tatuajes, strange piercings, and ill-fitting clothing made in places where the tailoring is done with the small hatchet and duct tape.

Still, there are many compensations for enduring such affronts, such as this… 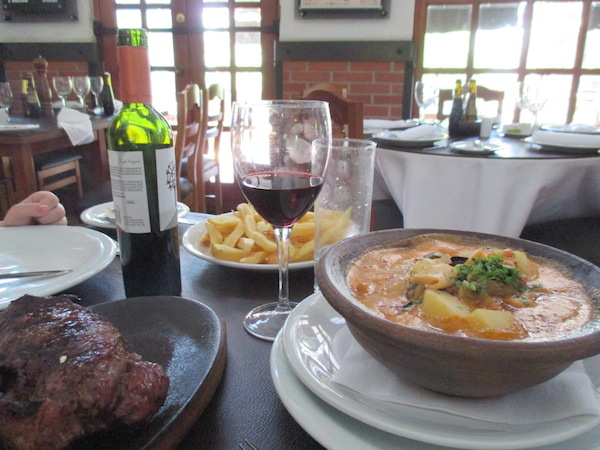 The meal of the bife de chorizo and the caldillo de congrio, accompanied by the fine wine of Chile.

And soon, the Manolo will again pay the visit to the Museo de Moda, which he considers the best fashion museum in the world.

In the meantime, here is the pair of shoes that the Manolo would put onto the feet of the Chilean ladies, if only they would consent to the Manolo making them over.

It is summer in the Hemisphere of Southerness! What better way to celebrate the quirky excitement of the Santiago de Chile, than with the chunky platform sandals with the embroidered flowery details from the Prada! The Manolo wishes you the most super fantastic of holidays, warm and happy, with friends and family, good food and wonderful gifts!

Manolo in the Daily Dot

Manolo says, in case you missed this, last week, the Manolo wrote the small piece for the Daily Dot website about the pernicious effects of the fancy food blogs…

It is all because of the deleterious effects of the food blogs that early this morning you had to make the special trip to that hipster butcher shop, you know the one with the nice young men who have the arms full of tattoos and wear the ironic handlebar mustachios. Unfortunately, because of the food blogs, you had no choice. You had to pick up the organic, pastured, free-range, eighteen-pound heirloom turkey, which had been ordered directly from the farmer for your big Thanksgiving meal.

When you got to the check out counter, you were afraid to look while the Betty Boop-a-like girl in the polka-dot kerchief rang you up, so you just handed over your debit card and pretended to examine the copy of Adbusters. It was one hundred and nineteen dollars and change. More money than you had paid for the past six holiday turkeys combined, all of them honest Butterball toms who had given their lives in noble service to gluttony and national pride.

You had not wanted to spend so much money on the bird, but two years ago it was your brother’s turn to host the family festival, and his wife (who is the adjunct professor of sociology down at the junior college) served the organic free-range turkey, which everyone, including your husband Gary, praised as “the best bird ever.”

What made this all so galling is that your sister-in-law has her own silly food blog, (silly, despite the fact that it was nominated for the James Beard Award for Excellence in Pornographic Food Photography, which it thankfully did not win) which means that on Friday morning the entire interwebs were treated to the large picture of Gary, fork in mouth, being transported in orgasmic ecstasy to the ethereal plane of turkey delight. Tweeted and retweeted by the followers of your sister-in-laws blog, this photo of Gary had become, by the end of the weekend, its own meme, prominently featured above the fold on the Buzzfeed with the variety of captions, the majority of which were variations on the theme “Ermahgerd Terky!”

And now you must go read the rest of the piece.

Manolo says, on this day eight years ago, October 16th, 2004, the Manolo began his earthly mission of bringing the beauty and magic of the shoes to the internets.

And now, nearly the decade later, the world has changed, and beautiful shoes are everywhere, all over of the internets, the shops, the runways, and the streets. Shoes have been finally and universally recognized as the greatest and bestest fashion accessory of all time.

To put it more plainly: We are living in the Golden Ages of Shoes.

What joy it gives the Manolo to know that he has done his small, tiny part in helping bring to about this apotheosis.

Most of all, however, on this happy day, the anniversary of the shoeblogging, what joy it gives the Manolo to know that he has made so many dear internet friends over the years, friends who have provided him with their attention and affection and support.

The Manolo, who could never fully express the deep gratitude he feels, can only say, dear readers, you are indeed most super fantastic!

The Manolo on the Go

Manolo says, dear friends, apologies from the Manolo for the paucity of the posting. He is on the road today. Later this evening, he will post something entertaining. Please forgive.

In Which the Manolo is Blocked by the Roseanne Barr

Manolo says, the exchange from the Twitter of the Manolo.

You have been blocked from following this account at the request of the user. Allow the Manolo to stipulate that if you are not following the Manolo on the Twitter, you are missing some of his better witticisms.

Instagram is down? Obviously, Facebook paid $1 billion dollars to implement evil plan to prevent people from posting photos of cupcakes

Today is the fifth anniversary of the iPhone? Thus we can finally name the exact day the art of conversation died. #iPhone

Or not, if you are French. RT @sistertoldjah: If u have elderly relatives, check on them the next few days as heat records will be broken

END_OF_DOCUMENT_TOKEN_TO_BE_REPLACED

Guest Posting at the Shoe Blog of the Manolo

Manolo says, now that the Manolo has revived his formerly semi-moribund shoe blog, he would like to invite his internet friends to consider contributing the guest post or two.

It does not matter if you are the fashion blogger, or the non-blogger, the Manolo would love to see what his internet friends have to say about such topics as shoes, runway trends, shoes, fashion history, shoes, celebrity misadventure, shoes, indeed almost any topic that is not overtly political, or overly controversial. All the Manolo asks is that the contribution be thoughtful and moderately entertaining to his readers.

If you would be interested in doing this please to send the Manolo the email telling him what you would like to blog about.

END_OF_DOCUMENT_TOKEN_TO_BE_REPLACED

Be Super Fantastic, Doings of Manolo!

Manolo says, the Manolo politely reminds you that he maintains the online presence on several of the most modern social media platforms. For the example…

The Manolo would take is as the great favor if you were to “like” his humble shoe blog on the Facebook.

Likewise, the Manolo shares some of his more ephemeral thoughts through out the day at his Twitter feed, to which you may wish to subscribe.

Additionally, the Manolo sometimes fiddles around with the Tumblr thingy and the Pinterest whatzit, pinning the pictures and tumbling the quotations that capture his fancy.

As you may have noticed, the Manolo has returned to posting more frequently, likewise, the Manolo is working to revive his moribund Super Fantastic Newsletter, which he hopes will eventually send out the weekly news about the Manolo, together with coupons, bargains, announcements, and contests. Naturally, the Manolo would be enormously pleased if you would consider subscribing to these email updates.