Manolo says, ayyyy! Who knew Brooke Shields was so nice! She is like the giant, beautiful goddess of nice, radiating kindness and good humor everywhere.

Clutch us to your ample bosom, Giant Goddess Brooke! Teach us to be nice to annoying persons with consciously outre hairstyles and studied personality traits. We are your votaries!

Such is the power of Goddess Brooke’s graciousness, that last night, even the most contrived attempts at creating dramatic friction (between Korto and Joe, and Terri and Suede) resulted in the big nothing. And thus, for the first time all season, the clothes were the stars, and not the tediously strained fake personalities.

And for this we are thankful.

Yes, there was that unpleasant (but funny) moment on the runway when Kenley sniggered at Daniel’s protestation that he was possessed of “impeccable taste”, the moment that was sort of like Minnie Pearl making fun of Dolly Parton, ridiculous and ironic on more levels than one could care to count. And in truth, it just made the Manolo pity poor Daniel, self-deluded, his ship of self-image foundering on the rocks of reality.

Other than that, this was the drama-free episode. Indeed it was even one of the few episodes in recent memory when someone actually took Tim’s advice and used it to improve their outfit, as Korto did with her “giant sweet potato” jacket, belting it up and into some semblance of shape.

For the Manolo, the final runway show was the revelation, as it showed that there was more to Keith the Angry Gay Mormon than insecurity, self-regard, self-loathing, and that stuipd bandana. (Who does he think he is, the auxilary member of the 18th Street Locos? ) His final outfit was gorgeous and original, and completely appropriate for Brooke Shields. Bravo!

Likewise, the Manolo has gained new respect for Miss J. Jarell, who is much more intelligent and thoughtful than his silly personal costuming would indicate. His final outfit was the smart blending of textures and materials, and the Manolo preferred it ever so slightly to Keith’s. That belt was rocking.

As for the other outfits, the Manolo agrees that Kelli’s was the clear loser, tacky and cheap-looking as it was. Korto’s wasn’t bad, and ditto for Terri’s, although the Manolo grows weary of the pants thing.

And then there was Blayne, who truly seems to have little talent for original design. Didn’t the Manolo see this exact same grey Bermuda short set on Jennifer Aniston, circa Vince Vaughn? Worse, what is up with Speedy’s the Alka-Seltzer Boy’s hairdo? It does not seem so much styled as thatched.

Of the course, the Manolo now feels guilty for making the gentle fun of Blayne, for it is clear that whatever he lacsk as the designer, he more than makes up for in human decency. They way he behaved on the runway, when asked who should be sent away if his outfit were judged the worst, was the true lesson in grown-up adult behavior. The Manolo salutes him for this edifying display of Brooke Shield’s style graciousness, it deserves our respect.

Bettye Muller for the Thursday 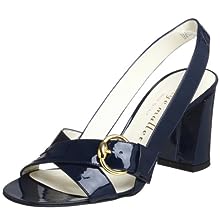 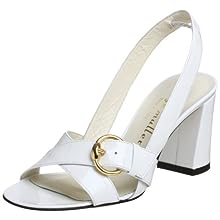 Manolo says, here is something simple, direct, and handsome from Bettye Muller. This the sort of shoe you could proudly wear for many, many years to come, something that would never go out of style.