Manolo says, from the Manolo dear internet friend, the famous and gifted writer person, Linda Grant, comes news of this...

They are built for the user to recline into, with their feet at the toe end of the shoe and their towards the heel.

Water trickles from a jet at the heel of the shoe for hair washing, while the plug is situated down in the toe end.

One of the designs, by Italian makers SICIS, is a 5ft platform heel.

The baths are all decorated in an elaborate glass mosaic style, making them resemble a disco glitter ball.

One features a shimmering bow amid different shades of pink and rose. Another option to choose from is a sparkling silver tub adorned with blue flowers.

One of the firm’s tubs, designed by Massimiliano Della Monaca, was styled on a pair of heels worn by the doll Barbie, who celebrates her 50th birthday this year.

Manolo says, the Manolo has reviewed the The Towering World of Jimmy Choo for the New York Post. Here is opening part to whet your appetite.

Like all good fairy tales the story of the phenomenal success of Jimmy Choo shoes should, by rights, begin with the poor, but honest cobbler toiling tirelessly in his decrepit workshop. Such virtue should be then rewarded. But, this is the 21st century, and so this fairy tale, “The Towering World of Jimmy Choo,” by Lauren Goldstein Crowe and Sagra Maceira de Rosen, begins with naked pictures of a spoiled rich girl. 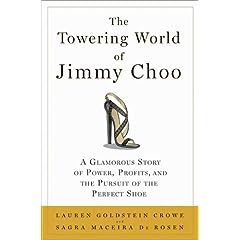 The spoiled rich girl is Tamara Mellon, the force behind the transformation of Jimmy Choo from the talented, persnickety, poor-but-honest Chinese-Malaysian-English cobbler, into the household name. The naked photographs, which are being auctioned off by Christies to benefit charity, are not just of Mellon, but an entire who is the who gallery of 21st century celebrity slatterns, including the queen bee herself, Paris Hilton, clad only in Cartier jewels and Jimmy Choo shoes. At the auction, “the [bidding] exchange continued until Walid Juffali, a Saudi Arabian billionaire, had spent £220,000 (or $396,000) for the naked Tamara. He beat out Flavio Briatore, the Formula One racing boss and one of Tamara’s old flames, who was seated in the front row next to Elton John. It was shy of the £270,000 ($486,000) that Juffali had paid for the naked Kate Moss moments before.”

Such is the raw material of the modern fable: wealthy nincompoops, grasping self-promoters, society page jackasses, bumptious oil sheiks and vaguely aristocratic, Euro-trash slimeballs, all jumbled together with more money than can be reasonably counted in one lifetime.

Now you must go read the whole thing.

Manolo says, over the weekend, at Eurovision 2009, the final battle for the soul of Europe was joined, Good versus Evil: Let’s Rock!