I’m just not sure about this whole smoking slipper trend.

(These are from Ralph Lauren. Sort of a “I stole the altar hangings from a church during Lent” look about them but in a nice way. Click image for link)

I actually quite like smoking slippers as a species for private use.

I even have a custom pair with my initials and Latin family motto and everything. Got ’em in London seven or eight years ago when I first girlishly dabbled in bespoke footwear.

I’d pinched my pennies hard and the brutal exchange rate at the time –2:1 dollars to pounds– pinched them harder so I’d juuuust about managed to afford two pair of whipsnake d’Orsays plus a cheap seat to Equus back when people cared about Daniel Radcliffe’s uh, hufflepuff (and, from what I remember of the show, well before he learned the elusive yet powerful manscaping spell.)

The shoemaker was running some promotion where the third pair was 50% off and the smoking slippers were the only kicks I could afford and still pack both of my kidneys on the long flight home (my liver I left somewhere north of Berwick-upon-Tweed.)

It’s just…I mean…do they feel a little  Let Them Eat Cake right now, given the current extreme levels of social and political divisiveness, in a way that’s just slightly different from regular “status” shoes to anyone else?

Like a little too eager to harken back to the good old days of Britain when we imagine everyone acted just like characters from an Oscar Wilde play and everything was great and too, too refined provided you were white, male and had scads of money (you know, as opposed to the times in history where being a rich white guy has been such a disadvantage) It just strikes me as tone deaf.

Is it me? It’s probably just me.

It’s like the old relative you know and love, the one who slipped you twenties in your birthday card when everyone else gave you two freshly-ironed dollar bills, but is, well, kinda racist.

It’s like you’ve brought your new boyfriend to meet the family for dinner and everything’s fine and all of a sudden your beloved great uncle says “You know what I like about Obama?” and you just sit there praying to God harder than you’ve ever prayed for anything that didn’t involve peeing on a stick that the big reveal won’t involve the phrase “so well-spoken.”

It probably doesn’t matter. In a few months cheap and cheerful versions of the traditionally British social signifiers will flood the market and with dilution of design will come dilution of the message, kind of like wearing delicate little slippers once either meant you were posh (in the UK) or quite possibly a prostitute (in Louisiana) I don’t know.

Am I overthinking this? Put it in the comments.

Manolo says, her this the Manolo’s latest column for the Express of the Washington Post.

I am only 44 but was recently diagnosed with arthritis in my knees and was told by my doctor NO high heels. Any time I cheat and wear even a low heel (2 inches) I end up in pain for three days, so I’m back to flats. This summer has been fine because I can get away with ballet flats, and I can wear riding boots with skirts in the winter, but when I need to look really professional for special meetings and presentations, I need to wear skirt suits, and a very professional-looking shoe. Can you help me find a flat, comfortable, but professional-looking shoe?

Manolo says, ayyyy! It is true, time is cruel!

One minute you are the 22-year-old hottie, who looks amazingly great dressed only in the ill-fitting burlap sack from the Sears, and the next you are twice that age and have just received the personal letters from both the Dolce and the Gabbana asking you to please, please, please stop wearing their clothing. (And, look! Stefano has even enclosed the check and the Talbots catalog!)

And this says nothing about the various infirmities and physical indignities that are brought by the process of aging. Indeed, the Manolo, who is the gentleman of the certain age, has his own trick knee, one which renders him unable to walk without the slight limp, or drink vin ordinaire.

Here is the Flatiron from the Stuart Weitzman, the smashingly smashing dress flat in the rich cognac anilie finsh that will leave the teeny boppers in their burlap dresses gaping with envy.

Manolo answers, it is the Emma Stone!

Congratulations to the Manolo’s internet friends, the Carol and the Illhab, who tied to be the first to correctly identify this week’s celebrity personage of note.

Giuseppe Zanotti, Is It a Shoe?, Miss Plumcake

Last week I introduced my loyal readers at Manolo for the Big Girl (which is about way more than big girl stuff, in case you’re interested but are worried about catching fat from the internet) to the fun new game, “Is It a Shoe?”

The rules are easy. I provide an image of something that may or may not be footwear, and you answer two simple questions:

The winner will be picked the next week and lauded with palm branches or whatever else I find handy.

Are you Having a Garbo Moment?

I know I am. Let’s all find our key light and lift our tweezers high (but responsibly) to celebrate the natal day of Sweden’s own Greta Lovisa Gustafsson, aka the glamorous Greta Garbo.

Tweezerman slanted tweezers, the Frye Lois Oxford, Waterproof French Anglobasque beret, made in France by Nielba, and luscious cashmere-lined leather gloves from Fratelli Orsini, on sale and available in 15 colors.

Of course, if only the real thing will do, several of Garbo’s signature berets are up for auction. Air of mystery sold separately.

When Vesta Tilley is on the bill you had best book far in advance, or you may tip-toe disconsolately at the back of the ‘standing room’, and catch but a stray glimpse of the goddess through the bobbing leafage of ladies’ hats.
.
Elaine tries to avoid all contact with her old college roommate because “she’s trying to infect me with Baby Fever!”
.
Don’t get me wrong — the dude is perfectly presentable…if he’s dressing to go to the grocery store.

Manolo says, it is Monday and you are back at your desk doing that thing that you do to make that money that you need to keep you from living beneath that bridge alongside the road.

“When did it become so difficult,” you ask yourself, perhaps rhetorically, “to eke out the living?”

And then you feel sorry for yourself, because all of your first-world problems are weighing you down:

For the example, you need the new washer and dryer, because the old set is seven years old, and does not feature the latest next generation, electronic time-delay cycle technology, which means that you must physically be present to push the button that turns on the actual washing machine, instead of setting it so that the cycle starts later, thus ending when you are around to put the clothes into the dryer. Without this magical 21st Century feature, you have to be there in person when the cycle ends to immediately put the clothes into the dryer, lest they acquire that moldy smell from sitting in the washer, damp.

And frankly, this morning you find this intolerable, mainly because you are catching the strange whiff of moldiness from your hair, which you dried this morning with the towel that had sat in the washer tub much of yesterday afternoon while you were at brunch.

Meanwhile, somewhere in southeast Asia, the woman who is exactly your age, to the day, squats by the muddy brown river, beating her family’s clothing on the large rock.

And, ayyyy! Look at how toned her upper arms are!

You would have to spend many hours at the gym to get that sexy arm definition, being hectored by the blonde airhead who directs the SculptZumYogaBo class.

And this thought has made you even more dolorous. 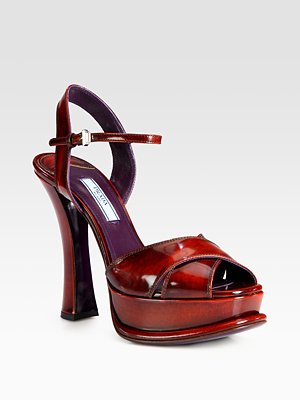 The leather Prada crisscross platform sandals from the Fall 2012 collection.

Manolo the Columnist: Angelfish from Sperry

I have been invited to spend a weekend on a yacht off the coast of South Florida at the end of September, with my boss, my boss’ boss, a senior figure at a key client, and their spouses/significant others. I am the most junior of the group at age 26. Please help me find a Sperry-esque shoe that meets the rules of the boat (must have non-marking soles, preferably with some grip), and will demonstrate that I am a serious professional, yet still celebrates my (relative) youth.

Manolo say, thanks to the steady diet of popular entertainment, this sounds to the Manolo like the set up to either the sinister thriller, involving volcanic island lairs and jump-suited henchmen, or the slapstick comedy of errors in which our heroine must conceal that she has accidentally dropped the big shot client’s wife’s obnoxious Chihuahua-poo over the side of the boat, thus endangering the important contract. And now, for the rest of the movie, she has to make up the increasingly elaborate excuses for the missing dog, while her wacky coworker (and best friend) hides in the cabin making the yapping noises.

Of the course, if your imagination is set at the expert level, this is actually the set up for the sinister comedy action thriller of errors, in which it is the dog belongs to the evil super villain who owns the super luxury yacht on which you are vacationing.

Here is the Anglefish from Sperry, the feminized version of the classic boat shoe in the platinum gold metallic finish. (If you feel this is too bold for Dr. Morbo’s yacht, The Yersinia Pestis, it is available in twenty other finishes, including the handsome linen and oat.)

These five unique offerings are available in extremely limited sizes, but if they’re your size and your style, you’re in luck.

Salvatore Ferragamo Berg sculpted wedge sandal
The question is not are they too Bianca Jagger; it’s are they Bianca Jagger *enough*?

The sculpted precision of the cut-out keeps these bisque suede wedges from being just another pair of campy kicks. For an absolutely horrible variation on the curvilinear theme hop on over to the other blog to play Is It A Shoe? Hint: I don’t really think it’s a shoe.

Ralph Lauren Collection Hannie riding boot
I don’t know who’s doing the accessories behind good ol’ Ralphie Lipschitz these days, but they knocked this one out of the park. Ralph Lauren Goes Horsey is Ralph Lauren at his best. I’m also pretty sure it’s the name of a mail-order-only DVD that comes in discreet brown packaging.

Ralph Lauren Collection Jearra t-strap sandal
I love vachetta leather the way nicer, less interesting people love their kids. Traditionally you’d have to wait for time and the elements to give your vachetta its characteristic patina, but it looks like the clever calzolai in Lauren’s Italian workshop have not just tooled the quarter and the platform but treated it, too.

END_OF_DOCUMENT_TOKEN_TO_BE_REPLACED

Manolo answers, it is the Kristin Chenoweth!

Congratulations to the Manolo’s internet friend, the Carole, who was the first to correctly guess this week’s celebrity personage of note.