The Bones of the San Valentine

Manolo says, many happy returns for the Día de San Valentín! May your day be filled with joy and chocolate hearts and trinkets made of pure love (and diamonds)!

And now, let us not forget the reason for the season… 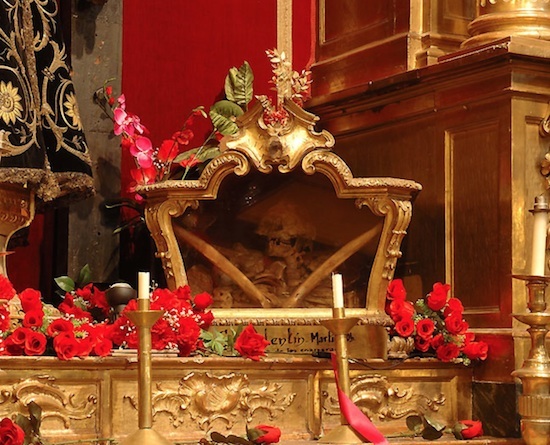 Yes, those are indeed the boney remains of the San Valentín, or at the least one of the many relics that are claimed to exist.

This nearly complete set of bones, which is one of the lesser known, is in the Real Iglesia de San Anton, on the Calle Horteleza, very near to the place where the tiny Manolo first found employment, many decades ago, in the shoe shop of the Mercurio Albornoz y Bahmonde. Often were the times when the little Manolo would go into the church for mass, only to discover the lovers who bore the cross of stars kneeling in supplication before this reliquary.

As you may see in the picture above, however, the bones of the Saint Valentine are the not especially big deal to the priests who run parish of San Anton. When the Manolo last paid the visit, the reliquary was covered with the dust, sitting alone in the rarely-visited side chapel. (Please to make your own metaphor, personal or global, about the state of modern love.)

And, now, because the Manolo is the beneficent dictator, the shoes suitable for the day of San Valentine! Here from the super fantastic Christin Louboutin is the Iriza Strass Crystal Pump, the most fabulous sort of shoe to wear to the mass of devotion to the Saint Valentine. And then, afterwards, to the muy romantico dinner tête-à-tête with that certain someone who has your heart locked up in their reliquary of love. END_OF_DOCUMENT_TOKEN_TO_BE_REPLACED

Manolo says, the Manolo recently learned that the tickets for the TED Conferences–which produce the YouTubes of the obscure middle-brow “thinkers” and pop-media savants flattering the ricos–cost $7,500 per person!

Thus, upon learning this, the Manolo put together this Venn diagram of the average TED Conference attendee… The intersection of wealth, self-satisfaction and inanity.