My 5 Best Songs About Shoes

Perhaps I’m addicted to list making (much like my strange addictions to vintage glasses frames and coconut water) but after compiling a list of my favorite movies about shoes, I felt compelled to build a follow up! Music, much like shoes, is a very important facet in my life, so why not combine the two into something acoustically pleasing inspired by that of aesthetic greatness? Shoe songs! What a concept. While there have been many, I have whittled my list down to 5 of what I consider to be the very best songs about shoes. This may just be my affinity for young Kevin Bacon talking, but this is a classic shoe tune. It’s a quintessential 80’s song that can’t help but bring a smile to your face, but ultimately it is a serious ditty about a man’s inner struggle to combat his absolute need to dance with his need to fit into a strict society where dancing is not allowed. Oh the inner turmoil and torture! So dark, such overwhelming angst! Kidding.The title track from the wonderfully cheesy 80’s flick Footloose, thing song is fun, great for dancing and an absolute wedding reception staple. This song even got Grandma Joan tapping her toes when it played at my last cousins reception. Not to mention, Sarah Jessica Parker stars in this flick pre Carrie Bradshaw! Those are some serious shoe roots. So kick off those Sunday shoes (or don’t, if they are cute and you can dance in them) and enjoy. 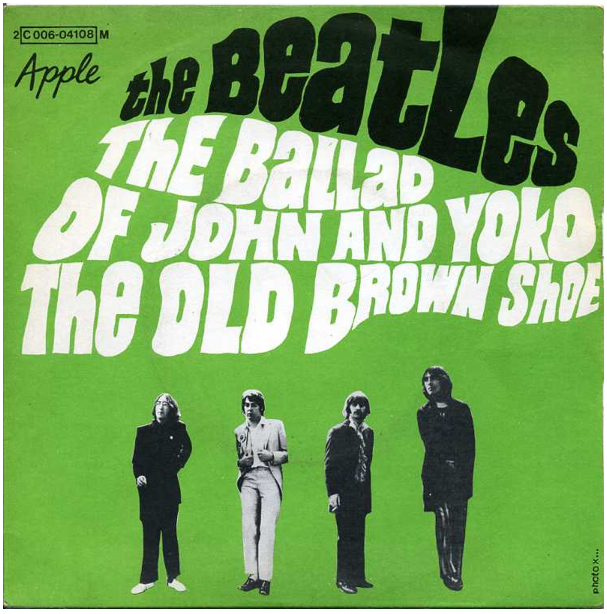 Ahhh, The Beatles. While not everyone is a fan, it is hard to find a person who doesn’t enjoy at least one song. With such a diverse catalog, these gents covered quite a span of music tastes. This song, which features George Harrison on vocals, was originally released as a B-side to “The Ballad of John and Yoko” and displays those four blokes in all of their “we are going through a weird drug phase” glory. Plus it’s one of those tracks with George Harrison on vocals, a bit of a rarity for Beatles hits (obviously not as rare as a Ringo song…poor Ringo), which makes it even more wonderful.

This playfully suggestive disco hit (are they really talking about dancing?) was featured on the Saturday Night Fever soundtrack and is undoubtedly a song to shake your hips to (in whatever fashion you’d prefer). This tune takes me back when John Travolta was a dreamy blue eyed babe (granted I wasn’t alive at the time, but I’ve seen photos) before he got all bald and starting sporting a weird goatee for Battlefield Earth. Yowch. It just makes me want to throw on my pair of highwaisted bell bottom jeans, which I do in fact own and are wonderful, with some far too tall heels and attempt to dance the night away. Boogie. Shoes. Yes please.

While this song was made popular by the late great Elvis Presley, it was originally written and first performed by Mr. Perkins himself. A fantastic tune of it’s time, if I was a mother when this was released I would have certainly been scared of the hip shaking it induced! This song is not only fun, catchy and made of toe tapping greatness but it also stresses the importance of shoes. Shoes over everything! The lyrics state “you can do anything, but lay off of my blue suede shoes”. And he literally means anything. Arson, theft, slander, enacting violence on his FACE, but when it comes to the shoes you better back the hell off. Well put Perkins, well put.

1. Nancy Sinatra – “These Boots Are Made for Walking”

This song is sexy. Play it in your room while trying on a pair of boots and try not to feel like a vixen. I dare you. This addictive 60’s hit is the perfect song about shoes: sexy, fun, flirtatious, catchy and it let’s the shoes do all the work. The boots are the star of the song! They own the song, and some day they will own you. I don’t know about you, but I find a bit of truth in these lyrics (serious debt to a shoe addiction?). Interestingly enough, after it’s release this song was widely considered a disappointment after the career legacy of her father Frank. Admittedly, those are some rather big shoes to fill (pun definitely intended), but later on it became one of the most addictive songs of the 60’s. While she never had another hit, this iconic song lives on today as a fantastically sexy ballad to the one we call shoe. Play it again!

I know I left out plenty of greats. What are you favorites?

People of WalMart, the Music Video

Manolo says, because nothing says pop music like Moldova and unicycles.

Today, when something monumental happens, it is standard practice to turn to the world wide web for a personal outlet of one’s commentary, usually via facebook, twitter or personal blogs. However, when it came to the announcement of Osama Bin Ladin’s confirmed death, Americans chose a different route: the official YouTube video for Miley Cirus’s pop anthem “Party in the USA”.

The chorus of the song does claim “Yeah, there’s a party in the USA”, while the rest of the lyrics paint a picture of a Southern girl visiting L.A., nervous about fitting in, her fears are immediately put to rest when she hears her favorite song on the radio.

Not exactly the same storyline of our country struggling to find and conquer a common enemy, but apparently many in the American public need only to spot the words “party” and “U.S.A” together in order to spark their sense of pride. The slew of comments include remarks like “USA! USA!” and “Playing this because Osama is dead. Proud to be an American!”. Check out the string of comments for yourself Americans chose a different route here.

While I don’t fully understand the choice of this particular song, I think it’s great that a silly Pop song can unite Americans and allow a place for celebrations of togetherness and commemorations for lost loved ones. Dare I say way to go Miley? I guess Pop music really can save the world….one terrible overproduced beat at a time.

Manolo says, the Manolo’s internet friend, the Yum Yum, has pointed to high-spirited Finnish rock band known as the Leningrad Cowboys, who for the past twenty years have been wearing the pointy hair and the pointier shoes.

In 1993, they even did the concert with the Red Army Chorus, of which the video below is the amusing artifact.

To the Manolo, the pointy-toes and pompadours of the Leningrad Cowboys have more in common with the Japanese Rockabilly dancers as the obvious appropriation and exaggeration of the American rock iconography, while the sudden appearance of the botas exoticas of the baile tribal are more sui generis and mysterious.

But, the Manolo leaves it up to you to decide.

Manolo says, the entire interwebs are in the uproarious uproar over the ridiculous and inane pop video from the moderately untalented singing teen girl named Rebecca Black.

Frankly, the Manolo does not see what is about all of the fuss.

Yes, the lyrics are silly, and the girl’s voice, or what can be heard of it through the auto-tuning, is not especially good, and the rap break is perhaps the little bit creepy, but otherwise this is not even close to being the Worst Song Ever. Indeed, it admirably fulfills the pop necessity of catchieness, sticking in your head long after you wish it would go far, far away.

However, what the contrarian Manolo appreciates the most is that this video is so innocently innocent.

Rather than the hyper-sexualized Cryus-beast, gyrating lewdly to the salacious music, we have the real-life, dippy, thirteen-year-old girl innocently singing about hangin’ with her extra double dippy friends…

In the land of the super dippy, the slightly less dippy girl is queen.

The video for the “Friday” is refreshing and honest and silly, and it makes the Manolo unexpectedly happy. There is none of that pose of adult dissipation and sexual knowingness that makes much of the teen pop music tiresome. It is just the silly fun video.

So, please, leave the Rebecca Black alone. She is having fun.

Manolo says, here is the French-flavored, imitation Motown to brighten the winter’s day.

Manolo says, she and Ibon Errazkin have been around for 25 years, but this is by far the best and most mesmerizing thing they have ever done.

Manolo says, Queen Ida, because it is the middle of January and the world looks gloomy, therefore we must brighten our day with song..

…and because we hope we can still be this super fantastic when we are in our 80s.

Things That Make The Manolo Happy

P.S. Many thanks to the Manolo’s internet friend Valerie.