The One That Got Away

When I started curating my shoe collection nearly a decade ago –when Lacroix still had his atelier, Gaultier was CD for Hermès and Muccia Prada’s current models were still fetuses instead of just practically ones– I did so with the knowledge that someday the newspaper gravy train, where I was raking in tens of dollars a month, would end.

I bought carefully and within my means, bringing home a pair of new lovelies only if I could pay cash and was confident they’d be just as stylish thirty years from the moment I stood, insidey parts all a-tingle, at the Neiman Marcus jewelry counter where my wisecracking sales associate always secretly checked me out so I wouldn’t have to wait in line like an animal.

That means my collection errs on the conservative side.

Good shoes are too expensive if they’ll look foolish after two seasons, and capable bank robbers willing to share their bounty with law abiding fat girls in heels don’t grow on trees, at least they didn’t in Texas.

Several years ago, I fell in love with a shoe.

Not just any shoe, the green python Anniversary pump, the cornerstone shoe for Dior’s entire magnificent collection, a far cry from the demure Valentinos I was collecting at the time.

It rung bells in belfries I didn’t even know I had.

My favorite house, referencing my favorite fashion era, using my favorite material in my favorite color. The only way they could’ve been more suited to me is if they came with a free chiseled commitment-minded footballer who loved to give foot massages as a gift with purchase.

Sadly, it was not to be. I did manage to locate a pair in fuchsia kid leather and I do adore them, but my beloved green Anniversaries got away and even though the shoeniverse eventually tried to make it up to me by sending me that foot-rubbing footballer, it’s just not the same.

What about you? What’s your one wearable that truly got away?

Manolo says, not everyone agrees that the Galliano was the genius.

I can’t imagine why people think this troll is so very talented. He’s been taking old, dead, has-been ideas, exaggerating them to cartoon ridiculousness, staging them with massive amounts of corporate money, and justifying them with post-modern pseudo-intellectual claptrap. Galliano’s b.s. has stunk for some time now. Maybe his most recent troll behavior will force people to realize he’s not all that, and never was. In fact, if the old French houses had any brains, they’d dump posers like Galliano and embrace the 21st century. Instead, they remain mired in a ironic nostalgia, as if that were still hip! Meh– it’s not “transgressive,” it’s not even modern. It’s just a boring pastiche of the past, designed by a crew of creepy drunks and junkies– who seem to hate themselves, their jobs, and their customers!

The Manolo does not agree with this, but the stridency of the comment and the fluid manner in which it was expressed made the Manolo laugh.

Manolo says, the Manolo’s friend Linda Grant has written the consideration of the scandale Galliano for today’s Guardian in which she determines it is all about the transgression.

According to fashion journalist Melanie Rickey, of the Fashion Editor at Large blog and Grazia, for years the industry has pushed Galliano to greater and greater extremes: “All everyone has ever wanted from John is transgressive fashion, and to use his excessive ideas to sell nice handbags and perfumes,” she says. And once you are set on a path to break taboos, it is almost impossible to find new ideas. So how on earth do you shock, when you have already exhausted S&M dungeons for ideas for haute couture? The great taboo in France and Germany is antisemitism. On this ground Jews were murdered or transported to be murdered. Watching the video of Galliano slumped alone at his bar table hurling insults at a woman who evidently asked why he didn’t make clothes that all women could wear, he spits out rage. She is ugly, he loves Hitler, he invokes the gas chambers. It’s a toxic mix of hate-speech, of racism and misogyny. How is it possible to go further than this? 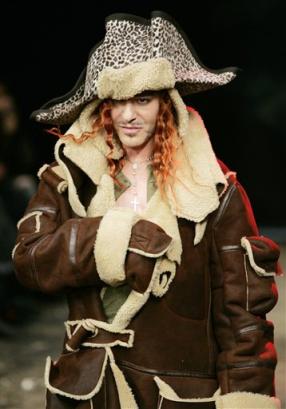 If you are breaker of taboos, then antisemitism is only another taboo, no different from any other. It’s the saying of the unsayable. It has become the last frontier for those demanding freedom of speech, for whom everything, even the Holocaust, is fair game. Is Galliano an actual antisemite who hates Jews? Who knows what passes through his mind, but by invoking the name of Hitler and gloating about the gas chambers, he is only doing what others have always paid him to do: shock.

It’s Galliano’s fortune and misfortune to have been named as a genius. He wants to go to the S&M clubs of the Parisian underworld and bring back chains and put it over a black leather bag and call the bag Bondage? Why not? Who would dare tell him that he has no idea what he is talking about when he says he loves Hitler, or that there is something the matter with abusing women in bars? Around him are innumerable yes men and women, bowing to his great thoughts.

Perhaps there is something to this notion of fashionable transgression taken too far. It is not as if the Manolo has not been railing for the past half decade against transgressive gestures that no longer transgress. (Here is the Manolo expressing his boredom with the Vivienne Westwood collection filled with the Nazi imagery.)

However, the Manolo thinks that perhaps the cringe-making Woody Allen quote found by the Manolo’s friend Ed Driscoll, is closer to the mark.

“Talent is absolutely luck,” he said one day while talking about his early fear of performing. “And no question that the most import thing in the world is courage. People worship talent and it’s so ridiculous. Talent is something you’re born with, like Kareem [Abdul-Jabbar] is born tall. That’s why so many talented people are shitheels.”

Certainly, this judgment would seem to be applicable in the case of the repulsive little fashion troll, John Galliano.

Manolo says, to be filed under things that make the Manolo both sad and angry.

Fasion guru John Galliano was filmed having a vile racist rant during which he declared: “I love Hitler.”

The British designer – an alleged Jew hater – then tells a horrified woman: “People like you would be dead. Your mothers, your forefathers, would all be f****** gassed.” His tirade was videoed by a friend of the people he was insulting – who were French and Italian, but not Jewish.

Galliano, 50, was at the same Paris bar where he allegedly launched a vicious verbal attack on two people last week – which led to him being arrested and suspended by fashion label Christian Dior.

After stating he loves Hitler and making the gassing remark, a woman is heard to say, ‘Oh my God’ before asking slurring Galliano if he had a problem.

Dior should fire John Galliano. Such behavior is beyond the bounds of what should be tolerated. Nothing more needs to be said about this specific instance.

However, such repulsive behavior in one so mightily talented raises the larger question: how does one separate the art from the artist?

The sad fact is that great talent is often found in horrible people. How can this be?

So, how does one enjoy the transcendent clothing of John Galliano without feeling that one is somehow patronizing the bigot?

How to sanction the artist, while admitting that his art brings beauty and joy to the world?

The Manolo, who loves the poetry of Ezra Pound, the music of Wagner, and the clothing of John Galliano, has no easy answer to this question.

The Longing for Transcendence

Manolo says, not all fashion is impelled by our nostalgia for the mud, indeed, the best and most enduring fashion is inspired by our longings for transcendence.

Transcendence. We wish to move beyond ourselves, to leave behind the mundanity of our lives and be carried aloft to the higher plane, to the place where we are more beautiful, more charming, more alluring, and where we are dressed only and forever in Christian Dior, 2011 Spring Couture Collection. There is such the thing as transcendent nostalgia, the longing for the golden past, for the specific Periclean circumstances that would allow us to be more than ourselves, to be better than we are, to achieve the apotheosis of our essential humanity. Beautiful clothing allows us to touch the hem of transcendence. What it gives is more than utility, more than adornment, more than fashion. Its true gift is the glimpse of perfection.

“Beauty is truth, truth beauty,—that is all
Ye know on earth, and all ye need to know.”

Six Years of Shoeblogging: The Many Faces of Galliano!

Today, the Manolo has set the Wayback machine for October 5th, 2005 to see the post about our favorite funky little fashion troll, John Galliano. You are looking at me, am I not magnificent and seductive? Now I will look back… Full Seduction! At last, I am filled with disdain for you and your looking ways. Yet, is my disdain, in its own right, not also seductive? Manolo says, oh how the Manolo wishes he were rich enough to afford his own John Galliano Lawn Jockey! Manolo says, and he appears to be exceedingly happy to see us. Is the Manolo the only person in the fashion press to recognize that Galliano’s Spanish theme for the 60th anniversary of the House of Dior is partly the homage to Manolete, the greatest torero who ever lived, and whose sensational death in the bull ring occurred in August of 1947, at exactly the moment Christain Dior was beginning his business?

It is not as if Manolete is competely unknown, they are making the movie about his life, with Adrian Brody in the title role.

It is perhaps the less well known fact that the Manolo, himself, was named after Manolete. Manolo says, Galliano! With the poochy little belly and the Dita von Teese and the barn door open! And now the Manolo must clarify the few things.

Yes, the Manolo likes to gently mock the John Galliano, mostly for his theatrical dress and his outrageous runway behavior. And yet, even as the Manolo mocks, he must also acknowledge that, more than any other current designer, John Galliano has the ability to be sublime.

Indeed, he is one of the few working designers whom the Manolo is willing to call the genius. This judgement, long held by the Manolo, has been further confirmed by his most recent Parisian show, the Fall 2007 prêt-à-porter collection.

There are pieces in this collection that the Manolo finds beautiful, and smart, and filled with character and charm and individuality and movement. And it is not just the individual clothes, but the entire gestalt of the show, with its detail and whimisicality, which impresses. Even the shoes, although ultimately unwearable, look good.