Manolo says, what is not to like about this? The Cole Haan Air Carma Peep-Toe Slingback, the perfect patent leather work shoe with the comfortable technology built in, selling at 60% off of the regular price!

And here is the closed-back pump version at the same great price! 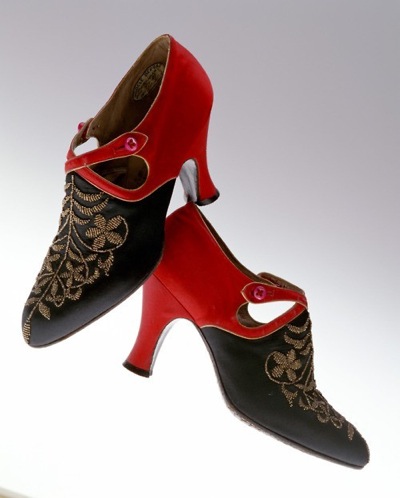 Shoe Personalities: Zuden-6 from Miss Me? Manolo says, hi, you’re Courtney, and you are originally from Alabama, from like this little town halfway between Cullman and Gadsden, and you were the salutatorian of your high school class, but now, at Vandy, that doesn’t really count for much.

You know, it is just these sorority girls from Atlanta, who all have the blonde hair and drive BMWs. That, or acerbic Northern girls with dark hair, from places you’ve never heard of in New Jersey and Connecticut, who always seem despondent but aren’t.

You really, really, really tried to fit in last year, but it was super hard. Let me tell you, those sorority girls spend money. When the Nordstroms opened at Green Hills, the Tri-Delts were lined up around the block, like it was the new cupcake store, or something.

So, in November, you saved up the little bit from what Momma and Daddy send you each month, and you bought some new clothes for the Rush Week, this sort of reddish patterned dress from Forever 21, and these shoes, which look vaguely like what some of the girls were wearing last fall.

You knew weren’t going to get into TriDelt or Kappa Kappa Gamma, because, you know, that’s crazy talk. A) Daddy is the soybean farmer, not the banker, and B) despite what your PawPaw says, you are not “the most beautiful sugar lump in the whole wide world,” especially not since you put on ten of the freshman fifteen.

But, you thought you had the good chance at one of the other houses.

You didn’t, not really.

It was probably the shoes, you know, they weren’t that comfortable, and they actually weren’t what the other girls were wearing by January.

Strangely, you were not as upset about not being asked back as you thought you would be. Your classes went really well last year, and you had the great summer back home. You lost some weight, and two weeks at the Gulf Shoes put highlights in your hair and freckles on your face, which you think look cute.

This year should be great, right?

Our Friend Virginia, Writing About the Shoes

Manolo says, our friend, the Virgina has written the column in the Bloomberg News on what the shoes say about us.

Like cars, shoes combine function and aesthetics, the promise of mobility and the pleasures of style. As apparel, they offer not only protection but transformation; as autonomous objects, they serve as “bursts of beauty that defy the mundane,” writes Rachelle Bergstein in “Women From the Ankle Down: The Story of Shoes and How They Define Us.” Unlike cars, shoes are also inexpensive enough to permit people to build diverse wardrobes, changing footwear with season, circumstances and mood.

Whether Jimmy Choos, Pumas or Toms, shoes let us stand out as individuals while fitting into similarly shod social groups. The complex relationship between the social and the personal is why it’s so hard to tell much about a shoe’s owner from a photograph alone — and why shoes are so interesting. Their meanings require, and sometimes reveal, broader cultural context.

There is much more to be said about this topic, and the Manolo will say it shortly. In the meantime, go read the whole article, it is worth your time.